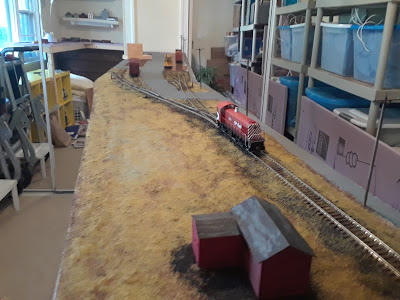 I promised in my last posting to post some pictures of the recent progress on my layout. At this point, I've given most of the layout a basic coat of scenery, with the exception of a few of the team tracks themselves. Also, I have yet to build the brick warehouse/office type building that will inhabit one end of the layout. At this point, though, it seems that it may be a while before any more progress occurs, due to circumstances beyond my control. Anyway, the scenery that I have completed was mostly finished this August, but I haven't got around to posting until now. I may end up redoing part of the scenery, as I've found vintage  aerial photographs  of the area from the period I'm modelling, which show the CP main much closer to the team tracks than I originally thought. These photos come from the excellent  City of Toronto Archives online collection  which I've recently become aware of - providing a fun way to spend a few evenings.  The whole layout, in
5 comments
Read more

Sorry that I haven't posted in a long time, so here's a video of some operations on my layout. There is no sound, and the video is short - but trains are moving and you can see some of the scenery that I've completed on the layout. This is posted on youtube - you can probably view the video in a larger format there. Also, if for some reason you can't see the video on the blog post, here is the link to watch it directly on youtube:  https://youtu.be/GYr-ned2Ez0 I'll try to post some photos of the progress on the layout over this weekend.
4 comments
Read more 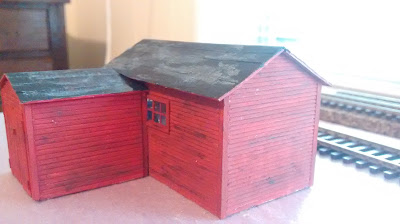 The left hand section of my new layout depicts the modelled industrial spur running parallel to the CP main, and on the plan I pencilled in a small railway-owned storage shed to add some visual interest to the scene. The shed wasn't based on any particular building, but instead was to be a sort of combination of various similar structures around Toronto.  As I don't have any foam core board yet to proceed with layout construction, I decided to scratchbuild one of the two buildings that should be necessary for this model railway. I hadn't scratchbuilt anything for a while, so I decided to build the storage shed first before tackling the Hinde and Dauch Paper Company building that is the focus of the right hand layout scene, as well as a rather large building. The shed was not built with any particularly interesting techniques - I used Mt. Albert scale lumber clapboard sheets for the walls and styrene sheet for the roof, which was then covered with masking tape to represent
Post a Comment
Read more 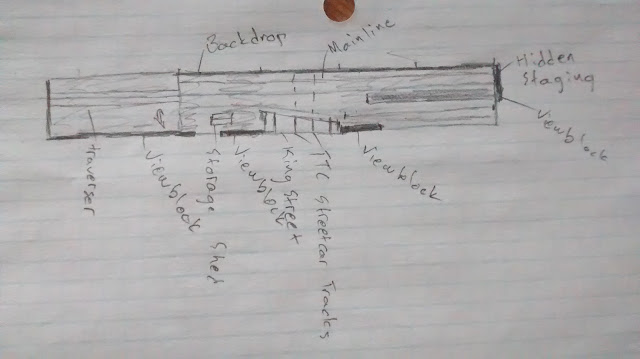 This does not, in any way, mean that I've abandoned the North Toronto Team Tracks layout. However, I've run into a bit of a problem as I can't move forward on construction for the layout until I can purchase more styrene strip in order to make curbs for the streets on the layout. Until then, though, I plan to work on a project that is feasible with materials I have on hand. Recently, I've been looking through the old posts of Chris Mears' excellent  Prince Street  blog. While looking through his blog, I came across his ideas for a model railway with tightly controlled viewpoints, showing only small scenes within a very large overall fascia. My explanation doesn't do the idea justice, but  here is the link to his original post on the concept.  At the time, I was quite intrigued by the idea, and as I had no layout at the time, I considered building a version of it. However, I was unable to come with a viable prototype for such a layout, and I eventually moved on
6 comments
Read more 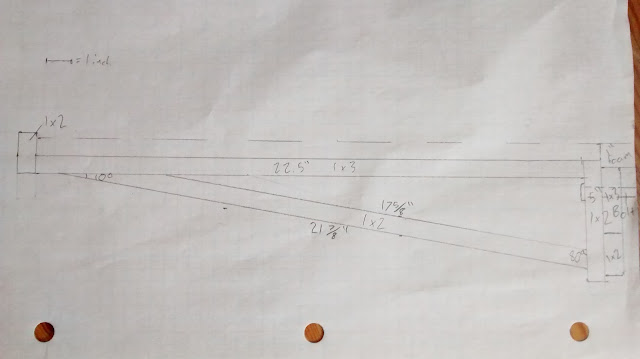 Quite a bit of progress has occurred on my model railway over the past few days, including the installation of all track on the primary two modules of the layout, though I have been remiss about posting about this progress. However, the next major project for the layout is the staging module. This is necessary before I proceed any further, mostly as I can't operate the layout until the staging module is attached as it serves as a yard lead/tail track. While the main part of the layout is now semi-permanently installed, the staging module has to be detached from the layout after each operating session, as it blocks the door to the room. The idea for this staging module comes from Rick De Candido's Fillmore Avenue Roundhouse blog. Specifically, I plan to use the idea for the tray assembly from his Staging Cassette Mk1  post to form the main part of the staging area. I also plan to use cassettes of some sort to finish of the staging area. I did, however, make a few modificatio
2 comments
Read more 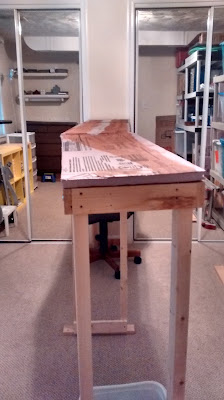 A condition that has been all to rare recently on my model railway. Slightly over a month ago, I finally came to a workable layout plan and posted about it. After that, I made some small progress towards constructing benchwork for that layout, and then stopped working on almost anything model railway related. Now, though, with the start of summer break from school, I have a great deal more time to work on the layout, and should start getting things accomplished (or so I like to tell myself, though I'm not sure how true that is...). It turns out that the two main layout sections fit nicely in the center of the storage room between two closet doors. There is, in fact, a fair amount to show in terms of progress from the last week. I managed to finish benchwork for the two main sections of layout, as well as attaching foam board layout surface. Additionally, I assembled a kit for a Toronto, Hamilton and Buffalo railway 40 foot hopper, which I plan to use for gravel service
8 comments
Read more 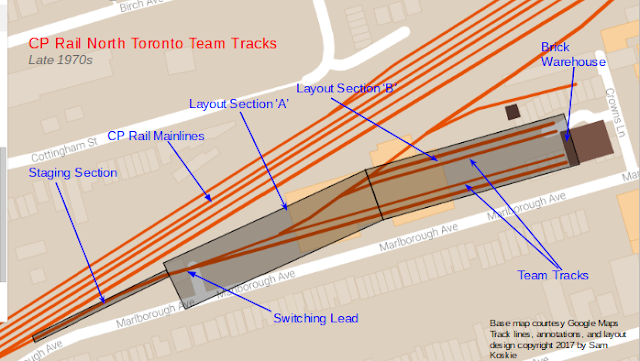 After quite a while thinking over numerous aspects of the hobby, and spending a while on layout design, both in terms of type of layout and location to be modeled, I've finally arrived at a plan that I think will work and serve my purposes for a layout quite well. This location modeled, the North Toronto CP Rail team tracks, will allow me to have some limited operation and an interesting layout, while the layout design is practical to fit in what space I have, thanks to the  Model Railroad to Go  concept. Over the last week or so, I've drawn up plans of the prototype location in google maps, made a track plan on my online prototype map, and most recently, I've drafted a paper plan for the actual layout as I plan to construct it. Before I elaborate on the aforementioned layout plan, there have been some rather noticeable changes made to this blog. I had grown somewhat frustrated with the typical blogger layout that this blog has used for over a year now, which I've fou
6 comments
Read more
More posts